Kevin Durant’s exceptional play should see him beat out LeBron James for MVP, but can KD and the Thunder upstage the Heat on the biggest stage of them all?

Scott Brook’s Thunder team has made it to the Finals before. Is this the season they take home the title?
Image: Melissa Majchrzak/Getty Images

The Story So Far

The Thunder currently holds the second seed in the Western Conference with a 57-21 record. They’re three-and-a-half games behind the conference-leading San Antonio Spurs, but after San Antonio clinched the first seed against Phoenix, they’ll have to deal with second place.

Most of Oklahoma City’s success this season can be attributed to the exceptional play of Kevin Durant, who has emerged as the frontrunner to take home MVP.

With Russell Westbrook struggling with injuries earlier in the season, Durant to his game to otherworldly levels in order to keep the Thunder at the top of the standings.

His scoring average of 35.9 points per game in January was a mark only ever matched by Wilt Chamberlain, Jerry West, George Gervin and Kobe Bryant. While he set the best mark in over a decade with 12 consecutive games with at least 30 points – including a career high 54 against Golden State, two games with 48, one with 46 and one with 41.

While his late-season form was just as impressive, moving into third place for the most games consecutive games with at least 25 points with 41 – leapfrogging none other than Michael Jordan (40).

The return of Westbrook to the court also provided a huge boost the Oklahoma City’s championship aspirations.

Appearing in 43 games, Westbrook showed no signs of losing his trademark explosiveness, as he slotted straight back into the starting line-up, providing 21.7 points, 5.7 rebounds, 6.9 assists and 1.9 steals per game worth of support for Durant.

Reggie Jackson (13.3 PPG and 4.1 APG) gained valuable experience filling in as a starter while Westbrook was sidelined and Serge Ibaka (15.2 PPG, 8.6 RPG and 2.6 BPG) continued to improve his ability to stretch the floor, nailing a career-high 39.3% of his threes during the season. 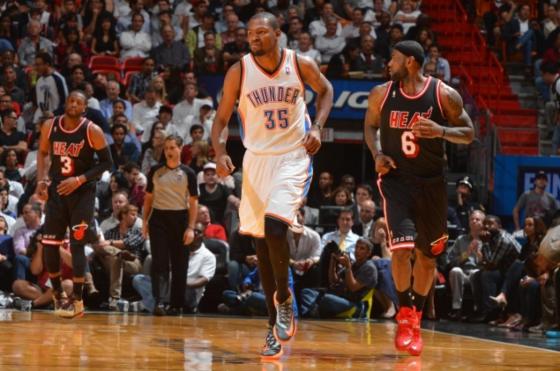 Kevin Durant is leading the race for MVP, will his Thunder finish the season on top?
Image: Jesse D. Garrabrant/Getty Images

Does it really need to be spelled out for you?

As talented and well drilled as the rest of Oklahoma’s squad is, their team will only go as far as Durant can carry them.

The Thunder’s sharpshooting gunner is having a season for the ages and is likely to win his first Maurice Podoloff trophy for his efforts.

This season, Durant has been a force to be reckoned with on the offensive end, scoring less than 20 points only four times during the season, pouring in 30-plus 32 times, dropping 40-plus 11 times, and exploding for more than 50 twice.

Meanwhile, he is also averaging a career-high 5.5 assists per game, showing he is not just a scoring machine, but also an improved leader in the Thunder’s offence.

There is no question that Durant has taken his game to another level this season, and with a healthy Westbrook by his side, he will be even harder to contain in the postseason.

As fantastic as Kevin Durant has been this season, it will take a team effort for the Thunder to win it all.
Image: Layne Murdoch Jr./Getty Images

They might finish the season behind the San Antonio Spurs, but OKC swept their season series 4-0 against last season’s runner-ups.

Their athleticism and scoring ability – fifth in the league for points per game (106.3) and seventh in offensive rating (110.5) – proved too much for the aging Spurs to cope with during the season.

The biggest key to the Thunder making a deep push in the playoffs is their ability to stay healthy and get contributions from their role players.

There is no stopping Durant from getting his each game, but if Westbrook is forced off the court again and guys like Jeremy Lamb, Caron Butler and Jackson don’t turn up, it could prove to be too much for KD to handle.

Assuming the Thunder stay healthy, they are destined to meet the Miami Heat in the finals. However, the Heat have the experience and the firepower to match the Thunder athletically, offensively and defensively.

Durant is amazing and Westbrook is beast when he is on, but OKC just lack the depth to push them over the top.

9 thoughts on “The Playoff Picture – The Oklahoma City Thunder”