If you haven’t seen it, Grantland’s Bill Simmons wrote a great article breaking down the 30 worst contracts in the NBA – a fantastic article that we strongly suggest you read – but here at Ball So Hard, we decided to celebrate financial sanity and delve into the best contracts in the league.

In the modern era of the NBA, big money contracts are nothing out of the ordinary. And while many superstars earn their hefty pay checks, there are countless cases of too much money being thrown at the wrong guy. So much so, the NBA introduced the amnesty provision to the latest CBA to allow each team an opportunity to purge themselves of their worst big-spending blunder.

To be fair, when signing a contract, there is always a sense of risk involved. The future is unclear, and putting a price tag on goods based around potential and projections can often backfire in the most spectacular ways. Example A: Gilbert Arenas.

However, NBA front offices don’t alway get it wrong. Here’s a look at the NBA’s best bargain buys.

While savvy selections in the NBA draft should always be applauded, rookie contracts are predetermined based on where a player is picked. So while the following players are paid below market value, you can’t praise savvy negotiating for their cheap price tags. 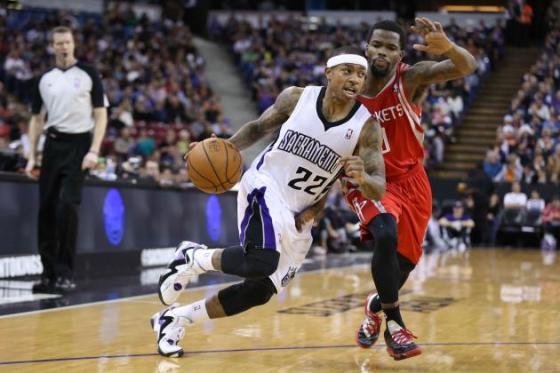 The last pick in the 2011, Isaiah Thomas is having a breakout season for the Kings, averaging 20.6 points and 6.4 assists per game. Of the 20 players averaging at least 20 points per night this season, Thomas is by far the only one earning less than $1 million this season. With DeMarcus Cousins‘ already signed, and Rudy Gay’s contract situation up in the air, it will be interesting to see what Sacramento can offer their star guard.

The Houston Rockets found themselves a bargain in Chandler Parsons. He makes $926,500 this season then $964,750 the next. He’s averaging 16.1 points per game and shooting 39.1% from beyond the arc, and is the perfect complimentary player to around with the big-money contracts of Dwight Howard and James Harden.

There was a time when Lance Stephenson was one of the most sought-after NBA prospects. However, struggles on and off the court saw him slide to the 40th pick in the 2010 draft. Thankfully for the Pacers, “Born Ready” has developed into a key piece of their championship-contending team. He’s averaging 14.2 points, 7.4 rebounds and 5.1 assists per game this season, and will once again be a highly recruited commodity in the offseason.

Here is a list of serviceable backup NBA point guards: Ramon Sessions, Luke Ridnour, Mo Williams, Greivis Vasquez and Jarrett Jack. The average of their salaries this season ($4,084,437.60) is more than the total of Thunder backup Reggie Jackson’s remaining rookie deal. He’s averaging 13.4 points (most amongst that group of six), 4.1 assists (third) and 3.6 rebounds per game (first). Jackson also proved he could hold his own as a starter when Russell Westbrook’s knee forced him to the sidelines.

If you were to redraft each of these guy’s draft classes, you could make a solid argument for them to be the first overall pick. In actuality, Damian Lillard fell to sixth and Michael Carter-Williams all the way to 11th. As a result they’ll both make roughly $14 million less than 2014 No. 1 pick Anthony Bennett over the entirety of their Rookie deals.

In hindsight, the Phoenix Suns getting Eric Bledsoe for Jared Dudley and a second-round pick was nothing short of robbery. Despite struggling with injuries, the Suns’ star recruit is averaging 18.0 points, 5.8 assists and 4.3 rebounds per game in his first year in Phoenix. Suns general manager Ryan McDonough has admitted Phoenix will pay as much as it takes to keep “Mini LeBron” on his roster. So, it is unlikely Bledsoe’s contract will be a bargain for much longer.

Every NBA team can be broken down into different roles and categories – stars, role players, cagey veterans, etc. – so likewise, we’ve split the best contacts in the league into separate groups. 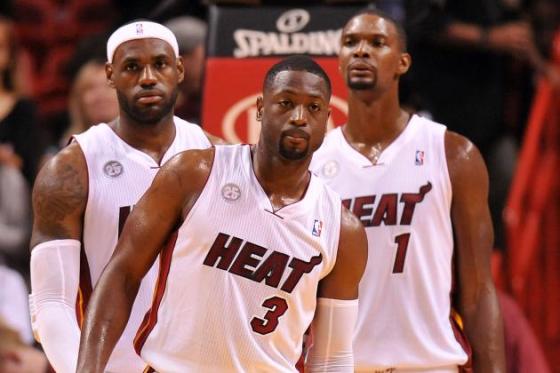 The Heat’s trio of superstars might still be amongst the highest paid in the NBA – LeBron James and Chris Bosh are ninth, and Wade is 13th – but when you look at the return on Miami’s investment, it’s hard to argue it isn’t money well spent. All three Heatles make less than Joe Johnson, Amare Stoudemire and even Gilbert Arenas this year.

A player of Tim Duncan’s calibre could easily have demanded max money when his last contract expired after the 2011-12 season. However, the Spurs big man signed a three-year, $30 million deal in order to give his team the best chance at another title run. Duncan’s sacrifice almost paid off last season as they came within one rebound and a Ray Allen three of their fifth title of the Duncan-era. San Antonio’s savvy negotiating has meant they have been able to keep their core of Duncan, Tony Parker and Manu Ginobili together much longer than many star trios. This season, Duncan makes less money than Emeka Okafor, Kris Humphries and Andrea Bargnani. Who would you rather have?

For the Golden State Warriors, Stephen Curry’s injury woes were a frustrating negative throughout his early years with the team. However, at the bargaining table, Curry’s suspect ankles allowed the Warriors to shave some dollars from their star player’s contract extension. Since signing that four-year, $44 million extension in 2012, Curry has developed into one of the league’s best point guards. But instead of being amongst the NBA’s highest earning guards like Chris Paul, Derrick Rose and Deron Williams, Curry makes the same amount as less lauded contemporaries Ty Lawson and Jrue Holiday. 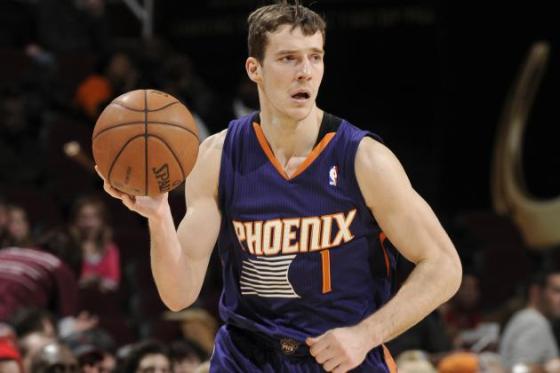 Speaking of underpaid point guards. Meet Goran Dragić. Admittedly, when the Dragon signed a four-year, $30 million deal with the Suns, no body expected him to ascend into the conversation of elite point guards in the league. This season, Dragić is averaging 20.6 points and 6.2 assists per game, while shooting 51.2% from field and 41.4% from the field. Only five players can’t boast those numbers this season: Dragic, LeBron James, Kevin Durant, Anthony Davis and Blake Griffin. The other four players on that list make a combined $58,678,387 this season. While Dragić’s salary sits between Marvin Williams and Tayshaun Prince’s contracts.

When Mike Conley signed a five-year $40 million extension with the Grizzlies in 2010, many thought Memphis was throwing money away. But in his seventh season, Conley is averaging a career-high 17.6 points to go with 6.3 assists per night. He helped keep Memphis within reaching distance of the playoffs with Marc Gasol sidelined, and he earns only one dollar more than struggling Magic point guard Jameer Nelson this season.

The Dallas Mavericks took a big risk when they gave Monta Ellis a three-year, $25 million contract in the offseason, but the former Warrior and Buck has adapted well to life in Texas and become a bargain buy. He’s averaging 19.0 points and 5.8 assists on the season, and could be a difference maker in helping Dallas hold onto the eighth seed in the Western Conference.

Before being sidelined with a back injury, Ryan Anderson was averaging 19.8 points for the New Orleans Pelicans as the premier stretch four in the league. Dirk Nowitzki might still be the prototype for the three point-shooting power forward, but Anderson is the leader of the new school. Before getting hurt, he was draining 3.0 threes a game at 40.9%. All while earning less than Charlie Villanueva. 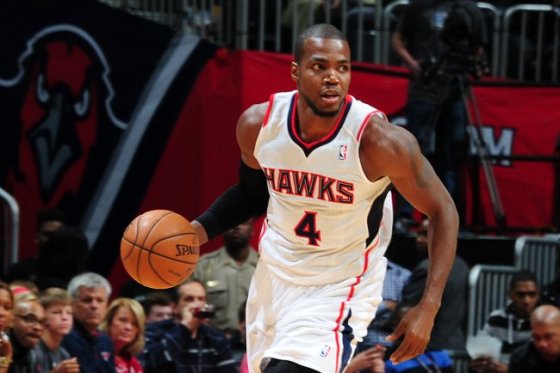 Paul Millsap’s two-year, $19 million contract with the Atlanta Hawks was the bargain of the offseason. They gained an All-Star calibre player (whose averaging 17.6 points and 8.3 rebounds per game this season) without giving up an enormous amount of cap room or committing too much salary for too long. If only every contract in the league was this sensible.

Sure, Arron Afflalo may be putting up inflated stats on a struggling Orlando Magic team, but there are not many players in the NBA who average nearly 20 points per game that make less than $8 million a season. In fact, there are only seven others. Six of which are still on rookie contracts. 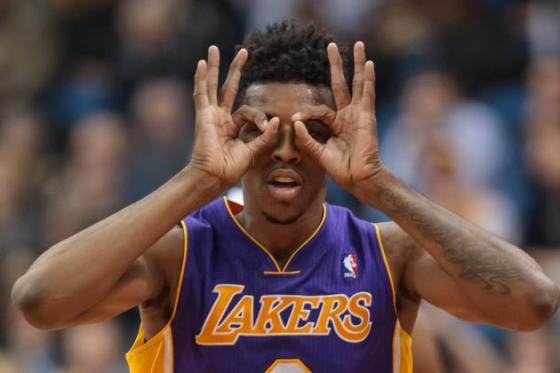 Times have been tough for the Los Angeles Lakers this season. However, there have been a few shining lights during an otherwise forgettable season. Nick Young has been one of those bright sparks. In his first season with the Lakers, Young is averaging 16.8 points per game, making him the teams second highest scorer. He’s only on the books for just over $1 million this season, with a similar player option for next year. However, it is likely that he will decline that option in order to take more money over a longer deal.

When last season’s finals hero Gary Neal left for Milwaukee in the offseason, there were some questions about who could fill the scoring void he left behind. However, once again the San Antonio Spurs simply looked down the bench and unleashed Patty Mills onto some extra minutes in the rotation. In a career-high 18.4 minutes per game, Mills is scoring 9.9 points per night. With Tony Parker sidelined, he has also stolen the spotlight with several impressive scoring displays.

The Phoenix Suns have been the surprise team of the season. They have a very realistic chance of making the playoffs after being cast aside as a lottery-bound mess before the season. One big criticism before the season was their lack of an established small forward. Enter PJ Tucker. The career journey man out of Texas is averaging 9.2 points and 6.4 rebounds in 30.5 minutes a game for the upstart Suns. All on a less than $1 million deal.

Traded by the Suns before the season and swiftly waived by the Wizards, Kendall Marshall’s career was certainly not living up the hype of a lottery pick. However, after being picked off the scrap heap by the struggling Lakers, Marshall has been a savvy bargain addition. With LA struggling for point guard depth, Marshall has given them 9.1 points and 9.4 assists per night since signing. He’s also shooting and impressive 44.8% from downtown (an often criticised area of his game). He makes less than $1 million in each of his two years with the Lakers. Now that is a bargain buy.