LeBron James exploded for 61 points against the Charlotte Bobcats, setting a new career-high for scoring and marking a new Miami Heat franchise record for points in a single game. 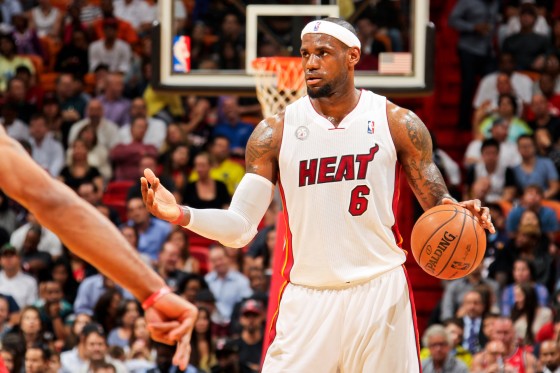 Reigning NBA MVP LeBron James set a new career-high for scoring with 61 points in a 124-107 win over the Charlotte Bobcats, besting his previous career high of 56 against the Toronto Raptors in 2005.

Wearing his new clear protective mask, James hit 22-33 field goals, including 8-10 from beyond the arc and 9-12 from the stripe. The two-time NBA champion also notched seven rebounds and dishes five assists for good measure. To make things harder, James scoring spree came against the seventh stingiest defence in the NBA.

James had 49 points heading into the fourth quarter (going a perfect eight from eight from three-point range through the first three quarters), but with Miami holding a 98-79 lead, there was a possibility coach Eric Spoelstra might sit his star player.

However, the Bobcats managed to keep the game close enough that James remained on the floor. He closed in on Rice’s record, reaching 55 points with 6:09 to play in the quarter, before surging past the record with a signature driving layup.

Check out LeBron’s record-breaking layup below:

After failing to reach the 60-point mark on a pair of missed three-pointers, James again took it hard to the hoop, taking his tally to 59 points for the evening.

James then barrelled his way into the lane, narrowly missing a three-point play basket, before sinking his 60th and 61st points of the evening from the free throw line.

Check out the 60th and 61st point of James’ historic night below:

Miami called a 20 second timeout on their next possession to remove James from the game. He received a standing ovation from the Miami home crowd.

James’ performance is the second 60-point outburst the NBA has seen this season, after New York Knicks forward Carmelo Anthony exploded for a Knicks-record 62 points earlier in the season. That performance was also against the Bobcats.